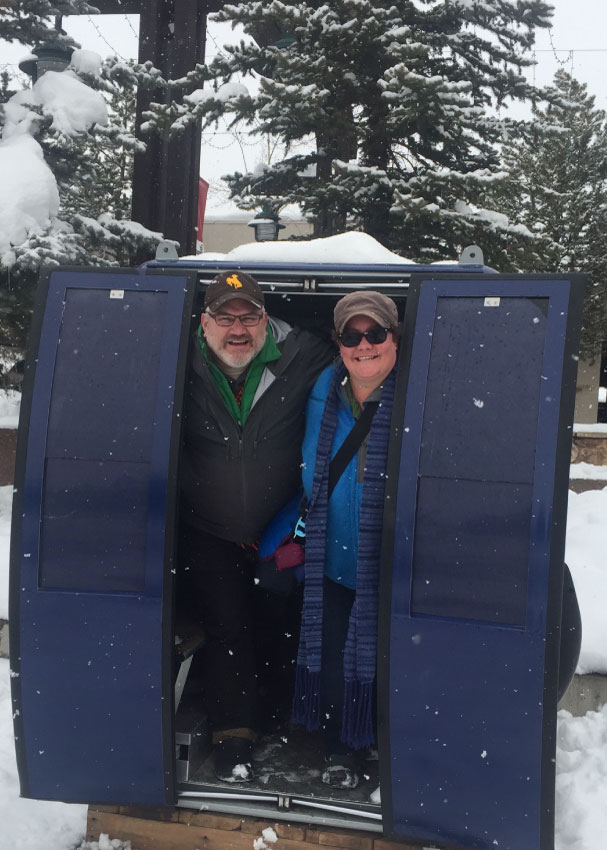 David and I met in March 2018 and quickly discovered that we both had a common interest in traveling. Our style is a mix of being adventurous in our destination and enjoying the energy as it passes us by. The music scene, restaurants that we don’t have at home, festivals like SXSW and sitting at a local coffee shop or brewery are some of our favorite things to do.

Summer of 2010, we had taken a number of local/Colorado weekend trips when we first met for concerts and festivals with our friends. Our first out of state trip was to Oregon for my best college friend’s wedding. They say a true test to a relationship is being able to travel together and we did it (with a few stories and jokes)! The weekend was at a remote cabin off the Oregon coast with roughly people camping, sleeping in RVs, and roughly 30 people sharing 2 showers. We were grilling and enjoying bonfires, talking about favorite music and concerts and making new friends. There’s a great picture of my friend jumping on the trampoline in her dress. We took a day to go to the coast and check out some local food and beer establishments. Less than 2 weeks later, it was off to Minneapolis with David meeting my family for the first time. To round out the year David and I traveled to Aruba for another friend’s wedding.

In 2011, we went to our first international Rugby 7’s tournament in Las Vegas. We’ve gone 4-5 times since having a blast each time. David and I have stayed in different hotels each time to have different experiences. We’ve gone to shows like Love, the Beatles Cirque de Soleil and Parade of Nations on Fremont Street.

We’ve also gone to Chicago twice for 3 international matches at Soldier Field. First in October 2014 for USA vs New Zealand which was a sell out match (occupancy is just under 67,000). The vibe and energy was amazing and better than any NFL game we’d been to. We stayed at the Hilton in Downtown Chicago, walking distance to the stadium, and an official hotel of the game.

The 2nd time was November 2016 with 2 matches. This time we stayed with one of my relatives who lives a block from the Hilton we stayed at 2 years before, again walking distance to Soldier Field, and on Grant Park. David has been a long time Cubs fan. Die hard Cubs fan. The night before we fly to Chicago we’re staying at the Holiday Inn near DIA. We’d driven down from Steamboat and had dinner with David’s family. Our flight to Chicago was early the next day. Game 7 of the World Series was on all of the TVs at the hotel restaurant during dinner. It was a nail biter! David’s family left but we had to finish the game. Cubs win!!! David had brought his blue Cubs W flag and wore it as a cape while we traveled that day to Chicago.

As we boarded the plane he sang the Cubs fight song and everybody cheered. By pure chance we were going to be in Chicago at the same time as the World Series Champs and their festivities. Grant Park plays a roll because that’s where the parade route and rally ended (started at Wrigley Field). There were millions of people who flooded downtown. We were lucky enough to be able to witness live the end of the parade and see the buses and hear the rally from my relatives 17th floor condo without having to be flooded in the masses.

Anyway, we went to the first, smaller match at Toyota Park on Friday night with my relatives who had a blast despite knowing nothing about rugby. The second, main match was on Saturday afternoon was at Soldier Field between New Zealand and Ireland. Ireland won despite NZ being a nearly undefeatable team. Again better than any NFL game is ever been to. New Zealanders are well known travelers for their rugby team, but because Chicago has a large Irish population, their national anthem was sung louder by the crowd. Gave me chills.

Otherwise David and I have traveled twice to Mexico, once for our honeymoon and another for a friend’s birthday. Both to Cancun. Our honeymoon was all inclusive adult only and we never left the resort. Our friends birthday was fun in mixing things up with activities at the resort, taking the ferry to Cozumel, and waking the local shops and restaurants. Plus there was a lot of Day of the Dead as her birthday is Halloween.

David and I went to Super Bowl 48 in NY for the Broncos vs Seattle. Game sucked by how much Seattle beat us. However the whole experience in NYC was amazing. We went to some great restaurants, visited Ground Zero, hung out in Time Square. Some of it game related to the package we did, others for personal. David had a personal moment where we went to the Dakota, where John Lennon lived and was killed and over to Strawberry Fields in Central Park.