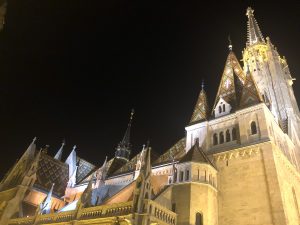 David and I were in Budapest, Hungary last week (July 25 -29, 2019) and we had a cool experience I’ve been meaning to share with you from a very personal but historical stand point.

We did a 3 hour tour of Budapest that we scheduled through the Hilton where we were staying. About half way through the tour, we made a stop to get out of the van and walk around an upscale hotel lounge serving brunch. David stopped in the restroom and I found myself alone with our tour guide, Nick, who had grown up in Budapest. He made a comment that he’d done everything in his life except be a hangman. At first it took me a few moments to register what he meant with what he said but then David came back from the bathroom and we left.

At the end of our tour, we asked Nick to talk to us some more about the history around our hotel and he was very obliging. The 3 of us ended up sitting at the restaurant lounge at the Hilton having a beer. We think Nick is in his 80s. At the very least, we know he’s older than either of our parents. We got talking about his family and growing up in Budapest and the hangman comment came up again.

In 1974, he had a 19 year old daughter and Budapest was still under Soviet Communist rule. His wife received a postcard from their daughter that she had arrived in Italy on her way to ‘escaping’ to the US. He initially said she had “safely” arrived but then revised his statement by saying “well, I don’t know about safely.” Nick knew as he had helped his daughter get out for a better life but didn’t tell his wife. When his wife got the postcard, the question was whether to tell the authorities that night or in the morning. Nick went to the authorities that night and spent 3-4 months in jail for not reporting an unauthorized leaving of the country. He said the prison guards threatened him every day to hang him, or by whatever means kill him.

After hearing him tell us this story, I asked/stated that it was worth it, right? He hesitated and said yes, but that his daughter suffers from never having a home. Neither the US nor Budapest is her home (or feels like home). She wasn’t able to return to Budapest until the late 80s with her son. When she returned home with the grandson, Nick asked what the boy wanted to do and the boy asked for a Coke and McDonald’s which had just arrived in Budapest with the Soviets leaving and Americans/West coming in. Nick still didn’t have a personal phone/landline in his home at this time.

Jane
Sent From My IPad

(I wrote this email to my parents about a very memorable experience that I had when traveling in Budapest, Hungary. Other than some minor edits for grammar and context, this is what I wrote.)