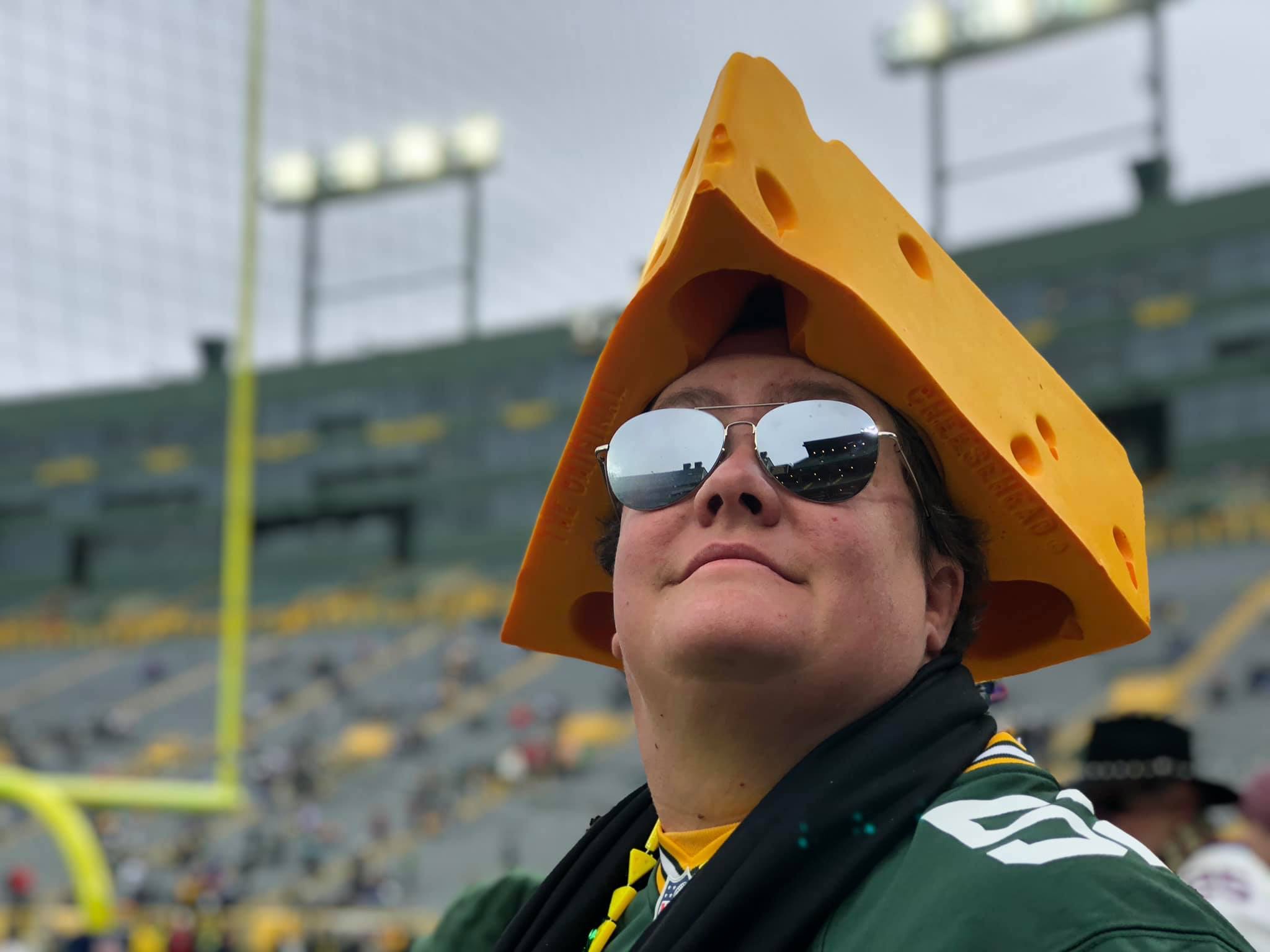 I have been a Green Bay Packers for as long as I can remember. Well, at least since I was a young kid with a large extended family that were Minnesota Vikings, Chicago Bears, and Detroit Lions fan. I think a big part of my becoming a Packers fan was more to do with being an individualist and less to do with any kind of pre-teen angst of feeling any obligation to subdue to any personal family interest. My extended family have been supportive and competitive about my alternative lifestyle as a Packers fan. Every fall I’d make bets with relatives about games and go double or nothing, but at the end of the day it was all in good fun and good humor.

At 35, I’ve a bucket list of things I want to do, places I want to visit, and experiences to be had. And one of them was going to a Packers game at Lambeau Stadium in Green Bay, WI. Growing up, I had been fortunate to see two games at the old Metrodome in the Twin Cities between the Vikings and Packers. While I knew I was fortunate to see those games as well another NFL games over the years, I knew it wasn’t the same as going to Lambeau. Don’t get me wrong, I’m not trying to sound ungrateful for the opportunities to see any NFL game, including Super Bowl 48 between the Broncos and Seahawks in NY. But there’s something memorable, historic and nostalgic about Lambeau. The originations of the team and contributions in developing the NFL as we know it today are amazing. I knew that if and when that day came I would go to a game in Green Bay, it would be incredibly special. I didn’t care who it was, I just wanted to be at a game for all it’s magic and glory. When David and I met in 2010, he quickly learned how much I loved the Packers and my wish to go to a Lambeau game.

In early August 2018, shortly before our six year anniversary, I went by the brewery on my day off to have a beer and hangout. On a break towards the end of his shift, David walked out to the counter all sweaty from working, held up his phone and said, “Guess what I did today?” I quickly saw that he had purchased tickets for the Buffalo Bills at Green Bay for the September 30! Holy shit balls!!! I practically fell out of my seat. It didn’t quite sit it until the following day when David showed me his email confirmation. I quickly went to work on flight and hotel reservations.

I’m normally a chill, laid back and humble person. I was able to keep my act together more or less until the game approached. I did a reminder on Facebook when it was 9/1 that I was in the same month as the game. I kept a time clock the week of, of how many days or hours until we drove to Denver, when our flight departed, and when the game began. Several of my coworkers knew of my love for the Packers and what this weekend meant to me, but I did my best to keep my excitement internal unless somebody asked. I came close a time or two to doing a cartwheel. As part of my preparation for Packers Weekend, I wanted to have an awesome outfit for the game. There was no expectation of being on the jumbotron or having a million pictures taken, or attention with it other than to just have fun. That would have been just a bonus. By the time we left home, I had a green tutu packed as part of my game day reveal. 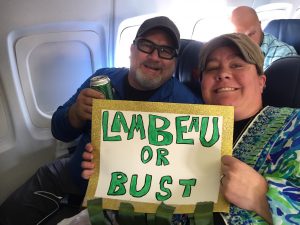 Unfortunately there are no direct flights from Denver to Green Bay. We flew on Delta through Minneapolis. There was no way of flying to Green Bay without flying through a rivalry town (Minnie, Chicago, or Detroit). I hoped (optimistic but not naive) that since we were traveling through an airport that in and of itself is a business to move/connect people from place to place that I would be ok to have my Cheese Head as carry on.  I wasn’t obnoxious or rude, hell I wasn’t even wearing it. David and I had time before our connection to have a beer and share a bite to eat. Neither of us were hungry but we shared a bowl of soup. As we approached the restaurant bar and got settled in, I set my Cheese Head on the bar for a moment while I shoved my bag under the stool and hung the jacket around the chair, the bartender immediately told me to get my “stinky rotten piece of cheese off my bar!” David immediately went into action about giving her traveling customers a hard time. She came back a few minutes later and said, “you know I was kidding right?” She walked away and we didn’t see her again. That was the extent of our bad times for the weekend.

As soon as we got to baggage claim, I saw there was a Green Bay gear store right there. I started to spaz and nearly sprinted to this closet size store. “David, get the bags while I go shopping!” Probably the first and only time I’ll ever say this. Our hotel was centrally located to downtown Green Bay and almost within spitting distance of Lambeau. A quick grocery store run for waters and light snacks would set us up for the long weekend.

Out first full day we strictly spent at Lambeau or within a 1 block radius, and I was as happy as a pig in mud that day. We shopped for more schwag at the real Packers shop that’s bigger than my house. We did a 90 minute tour of the stadium and got to walk out on to the field and I cried. Not just the getting choked up and a getting a knot in my throat, I had curled up lips with tears streaming down my face crying. I put on my reflective glasses and did my best to keep my shit together as we went out. David caught a few pictures of the whole experience, including one when he said smile and its the crying frown! Haha!! After we finished the tour, we had drinks and food at 1919, the restaurant at the stadium. We walked across the parking lot to Hinterland Brewing for dinner. David and I ended up at the hotel bar last night. There were a lot of out of town Bills and Packers fans were hanging out and we made a number of friends before going to bed.

GAME DAY!! I had a fun special outfit picked out for today. I’m wearing Packers leggings with a green tutu and a Matthews jersey. I’ve rounded it out with my cheese head. The night before we left Colorado I made a sign that said “Lambeau or Bust.” I carried that with me to the game but added “I Made It.” 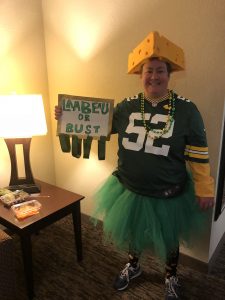 Even with free shuttles from the hotel to the stadium for the game, David and I took an Uber that dropped us off a block away. We walked through people tailgating and table after table of people selling game day merchandise. We bought a few silly necklaces and buttons. People were complimenting my outfit and as we crossed the street, we noticed a professional photographer taking my picture who shouted “pretend I’m not here, keep walking.” As we headed towards the Johnsonville Tailgate Village (JTV), the same photographer caught up with us and asked if he could indeed get a still shot of me. I was happy to oblige and provided my name and where I’m from.

JTV provides food and a full service bar with several televisions to watch the pregame coverage, as well as other games, with a rooftop service space as well. It was packed full of people by the time David and I arrived shortly after 9am (game started at 12). There was a live band playing music and there was an energy building in anticipation of the game. We hung out for an hour enjoying the merriment, drink hot cocoa and beer and devouring brats before heading into the stadium.

Despite the stash of gear we had picked up on Friday, there were a few additional items we wanted to bring home. As we entered, we had to go through security and a bag check. We were given foam seat cushions and sunglasses to celebrate the 100th season of being a team. Since we still had time before the game, David and I spent time wondering Lambeau. David made a sign supporting Josh Allen as a Wyoming player (David’s alma mater). More food, drinks and bathroom stops. We picked up stadium seat cushions with backs as Lambeau has metal bleacher style seating.

Holy Shit Balls!! Our seats were 2nd row right behind the end zone. Lambeau Leap territory. The seats were starting to fill in despite the game being more than an hour away. There were players, coaching staff, and trainers down on the field warming up. There were fans that were down on the field along the sidelines. David and I started chatting with the people in our section as we watched team highlights on the Megatron.

When it came time for the game to start, I got goosebumps as the players ran out and the music was blaring to get people pumped up. The national anthem was played and a large military plane flew in low over the stadium. The Packers were wearing their throwback jerseys of Blue and Yellow. The crowd noise was amazing! With how the stadium is built slightly into the ground and the stands have a more straight up build, there’s an echo that keeps the noise in. By the end of the game I was cheering along with Go Pack Go! I was throwing my arm out with the rest of the fans for First Downs. I was booing when the refs made a bad call. The sportsmanship of the fans was great, it was pretty rare that they yelled AT the Bills but there were a few times it did warrant it. Despite being a blow out game, a lot of people stayed until the very end of the game.

David and I debated if we wanted to head to Hinterland or other bars across from the stadium for post-game fun, but we ended up at Old Chicago. It was perfect. We watched other games and the post game report for the game we had just attended. David watched some baseball playoff games. We had a few beers to work towards my tours and some shareable plates. We eventually made our way back to the hotel where we dumped our stuff in our room before heading downstairs. Our friends from the previous night were there hanging out and we had fun talking about the game, sharing stories. There’s a couple from Calvary, Canada that we really hit it off with.