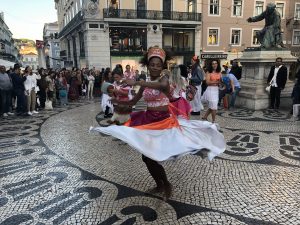 I must admit when David and I first flew into Lisbon, we were tired and dragging our wagon. We’d lost our bags in NYC over two days earlier from our flight from Denver. We made a last minute scramble to REI and CVS to regroup some semblance of what we had so consciously packed over the last several months before dashing to JFK to fly to Lisbon. When we landed in Lisbon we stood through an excruciating 90 minutes at Passport Control. As I fumbled with my phone to find our transfer curbside is when we looked at each other just about ready to face plant into our bed once we got to our AirBnB.

But with a warming, intimate handshake from our driver were we snapped into the vibrancy of what would be our home for the following four days. David, as the more social of the two of us, was busy talking so fast with our driver that I could barely keep up. On our very first day, Lisbon was celebrating their patron saint: St. Anthony. Our driver was talking all about what would be going on and how we’re in a great neighborhood to be part of the festivities and history of our neighborhood. He was speaking so fast and was so animated as he spoke. At every stop light he would turn around to talk with us and cars behind us kept honking when the light turned green. As he was telling us about the municipal holiday he would interject about the neighborhood we were driving through, telling us a brief history and what restaurant to eat at, before continuing on in the same breath. I kept waiting to get in an accident as he kept turning back to talk to us rather than watching the road. 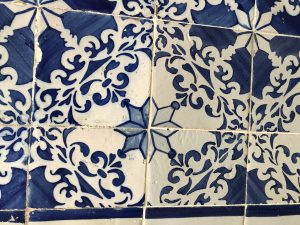 Once we pulled up to, or I guess our case he backed down our street, I jumped out of the van with my backpack and was confronted with a beautiful blue tile wall. Gorgeous! I immediately said I wanted that same style in our kitchen or bathroom as a backsplash, or maybe bathroom floors. Our AirBnB host arrived on his motorbike the same time as we did with our Eurail Passes we had mailed directly to them. He gave us a thorough walk through of the flat and told us where to find a market. We talked about the holiday festivities. After leaving us, David and I settled in and felt recharged with our welcome to Lisbon so far. We cracked our windows to get some fresh air and music began to fill the air. A small band of 3 had set up shop across the street from us in front of an old church. They played a handful of songs before moving up the street. The sound of a flute playing in the distance filled the air.
We grabbed our shopping bags and headed out to grab some food from the market before dinner. A few wrong turns and walking past it at least once, David and I found it. Another quick stop at a pharmacy for some more toiletries that we’re replacing from our lost luggage in NYC. We dropped our stuff off back at the flat and headed out again for beer, food and festivities. Every block seemed to have at least one grill and bar stand in front of their restaurant serving salty sardines, chorizo, or pork sandwiches. There were small variations on bacon, black sausage, or pork kebab as we moved through the neighborhood. The beer was poured liberally for the cheap, and there was a general disregard for food safety (no plastic gloves, using the same tongs on raw and cooked food). Our tiredness finally caught up with us and were asleep by 10. However, the festivities went on into the wee hours of the morning waking us up from 230-430. We woke up at 1 in the afternoon. 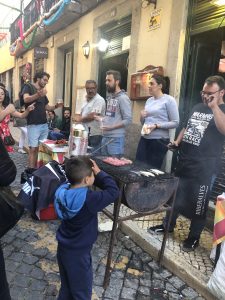 With our late sleep in, we quickly rallied making breakfast and heading out the door. We walked to Adidas only to find that it was closed for ‘holiday.’ So we walked around the corner and stopped into a wine shop serving tapas: ham right off the leg and cheese. A snack and glass of wine later, David and I were quite content. Our server told us of a brewery nearby and a market to walk through on the way there. Perfect! I grabbed a kebob at the market for a snack. David bought himself a scarf and earrings for his mom. The brewery was a hit as David did shot tasters of several beers. From there we walked back in the direction of our flat and stopped in at H&M for some shopping. I found a necklace and pullover, David found a few more items to round out his lost luggage.
We returned home and regrouped before heading back out for dinner. Down the street from us is Alma, a Michelin star restaurant. However, it’s a reservation only place with a month long waiting list. The maitre’d gave us a few recommendations and we headed to Time Out Market down on the water. David and I headed upstairs for a sit down dinner of small plates. After dinner we headed downstairs to the market which is a large upscale cafeteria with close to 2 dozen places to find a place to eat. We each had a gelato for dinner and had a beer before heading back to our flat already past midnight.
On our 3rd day we were both up by 1030. We leisurely ate breakfast before getting dressed and heading back out. We went back to Adidas and stopped into a kitchen place for a knife and salt/pepper shakers to have with us during our travels at our flats. Again we dropped off our purchases at our flat before going to Cafe Delirium. From there we caught an Uber to the Oriente Train Station to scout out where we’d catch a train to Porto on Sunday. We needed a little peace of mind on what was going on with our EuroRail passes. From there we walked down to the water having a bite to eat along the way. David and I were both craving a burger and fries. 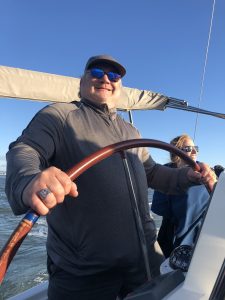 We headed to the marina for our sunset sailboat ride we set up with AirBnB experiences. There were 3 other couples with us. 2 from California (sisters on vacation with their boyfriends) and 1 from Vancouver. Vancouver was also a sailor and helped out. Once the sails were up the boat started to heal and I became uncomfortable. Leo, our host, saw that and tamed the sails so it wouldn’t be on it’s side so much. We sailed out to the bridge that looked like the Golden Gate Bridge in San Francisco, and everybody took turns at the wheel (except me). David loved it! I settled in back to normal and did enjoy the experience. Once we flipped around and headed back to the marina, Leo opened some wine and spread out some cheese, chorizo, and large croutons. The sunset was beautiful as we pulled into the dock. We all had 1 last glass of wine with Leo at the dock.
David and I Ubered back to our neighborhood and had beer and a snack at Cafe Delirium before walking home. We stayed up late writing postcards and talking with David’s parents.
For our last full day in Lisbon, we had a chill day at home doing some writing, laundry, writing more postcards and packing. David made a return to H&M having found something better at Adidas. For our last night we did a Craft Beer experience in our neighborhood that we found on AirBnB. We got a little lost finding the start location as the address was just a little off. But how much fun we had! There were 3 stops all with beers better than the last. I discovered that I love the Portuguese snack Lupini Beans. They’re a little salty and whether you eat them plain or with olive oil and seasonings, they’re delicious. Give it a light bite to squeeze the bean out of the casing.