6 Things I Wish I Knew For Cuba and Travel Tips 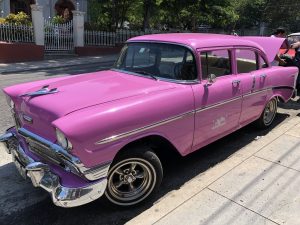 1. Cuban Culture
As excited, and probably idealistic, as David and I were to go to Cuba, we had some bumps in the road with the realities of this new place. And it’s not from our lack of traveling, camping, and experiencing ways of life different than our own comforts. David and I found that there were things we weren’t expecting.
It has been 60 years of the trade embargo with the US and you can see it, feel it. It’s a third world country. While money has come in from Russia and other parts of the world, you can tell business from the US is majorly lacking. While I’m glad that there isn’t a McDonald’s or Starbucks at every other corner, the simple businesses of things like infrastructure and sanitation still look like it did prior to the revolution. Long are the days of financial importance to trash and recycle: trash in the curbs, parks, and overflowing bins with no trash collector in sight. Plumbing is another thing that I’ll get to in a moment.
With the embargo lasting for decades and the lack of US money coming in for business, you can see it in the every day places of shops, restaurants, and tourism. One could debate that it’s the difference between capitalism and socialism that these things are lacking or different from the US, but there is a great deal of entrepreneurship that I saw with the Cuban people that could really take off with investment and bringing buildings up to code with electrical, plumbing, and validity of the neighborhoods. Get some gentrification in there!
We’ve decided that Havana needs to be hosed down and is in desperate need of a fresh coat of paint. Or two. If Havana was hit by a major hurricane, it would likely be a catastrophe of epic proportions. The city seems ill prepared for nearly any emergency, let alone one on a large scale. Havana is in desperate need of a shot of penicillin. And maybe a Z-pack. It’s dirty, rundown, and lacking in emissions testing. There’s also a frequent aroma of human waste, and not in a NYC sort of way…far more frequent. There’s a pervasive sense of having to do without, but a contentment in the people that it has been this way for nearly six decades. Why are there people begging? Isn’t everyone supposed to be cared for in this “paradiso socialista”?
How would a community garden work in a communist country? In Havana or Vinales, why can’t they reuse or repurpose spaces for fresh fruit and gardens?
Havana: The noises of a lot of cars, trucks, everybody honking. Not just the taxi or classic car drivers honking to get your business, or honking to get you to move out of the way. It felt like they were blasting their horns just because they could. The smells. While emissions testing and regulations can be discussed at great length for being too strict or not doing enough for the impacts on the environment, it is all but lacking in Havana. During our ride back to our flat from the evening at the Buena Vista Social Club, we climbed into an old school Russian car that I can only describe as a sardine can (or pill box) on wheels. As soon as the guy hit the accelerator the car filled with exhaust. We held our breath and choked in whatever air we could for the 10 minute roller coaster ride back to our flat. If it’s not the emissions, it’s the trash, the sanitation, the toilets, the walking down the street and having it smell like a plumbing pipe burst nearby.
Emergency Sirens: This feeds into the noises of Havana. Maybe a handful of times, David and I heard/saw an ambulance. We don’t recall seeing any fire trucks. The presence of whom I’d consider the police (maybe military?) were there and we saw them. The sirens from their vehicles never went off. When we saw them interacting with people it was unclear what (if any) transgressions were happening.

2. Buying Cigars
Don’t buy cigars and rum off the street. They might claim that it’s Cohiba or Monte Cristo but it’s not. It’s not made with the same quality ingredients. They’re going to sneak in palm leaves instead of tobacco. Buy from factories. Every cab driver or hotel manager will tell you (hustle you) that their cousin works for the factories and they can get you a better deal if you buy through them. But regardless of who is selling it to you, negotiate. Their first offer may still be cheaper than what you’d spend in the US but you’ll probably still get ripped off at that price. When going through US Custons, there’s paperwork/documentation that the US may ask for. Receipts, ingredients, is the box sealed with a sticker, does each cigar have a ring/band on the bottom?

3. Bathrooms (Public and AirBnB)
There is rarely toilet paper at public restrooms. There may be a roll in the stall with you. There may be a woman handing you 3 sheets as you walk in and you pay her a coin. There may be a woman who goes in after you and pours water into the porcelain bowl. Always have a small roll of toilet paper in your purse and take your purse with you to the bathroom even if the establishment is nicer and cleaner. Even at the Havana airport when we left, there was a porcelain bowl but no seat/lid. There may or may not be a toilet seat on the porcelain bowl. Be ready to squat over the bowl. This is more often than not, and there are rarely urinals for the men.
Have hand sanitizer or hand wipes to wash your hands. You might be able to rinse your hands with water but you’re in a 3rd world country and lots of bacteria in the water you don’t have in the US. The water is allgedly potable, but maybe not to US or European guts.
Once we were wheels up on our United flight to Houston, I got up to go to the bathroom. When I returned to my seat, I turned to David and said, “is it weird that I was more excited to use an airline lavatory than the best toilet in all of Cuba?”

4. WiFi/Internet
It sucks. It’s expensive at $1/hour. You boot up the router at your AirBnB and enter a bunch of numbers from the internet card you purchased. And it is incredibly slow, like dial up was in the 90s. We kept waiting for the screeching tones and the monotone computer voice to say “You’ve Got Mail.” We left our phones in airplane mode nearly the entire time we were in Cuba. For a brief moment, after we had boarded our flight to the US, I turned off airplane to see what, if any, reception I would have with ATT as my provider. Nothing. It Fucking Sucks!!! Even though we only used the internet for 1 hour, MAYBE 2 hours, a day, the poor service brought out a new daily mantra “for shits sake.”

5. Cash is King
With the socio-political history of the United States and Cuba in the last 60 years, it is no surprise that David and I couldn’t use our plastic (debit or credit) anywhere in Cuba. While the US relationship with Cuba has slightly defrosted in the last few years, Cuba isn’t easy to access for people from the US. Before leaving, David did a great deal of research for how much money to take with us and discovered 2 important things: 1. Take more than you expect to spend. As much as we budgeted for food, rides and things to do, we wanted to be on the safe side. Because if shit hit the fan we wanted to be able to budget for safety factors and have an exit strategy. If we weren’t able to get ourselves to Vinales and needed to move out of our first AirBnB, we couldn’t exactly check in to the local Holiday Inn and put it on a credit card or book the next flight on Delta back to Miami. 2. We would get a better exchange rate between Euros or Canadian $ to the CUC.
But once we arrived in Cuba we discovered that it wasn’t just us not using American plastic because of the restrictions on American financial institutions. I don’t think I saw anybody using their plastic at restaurants or shops. The only place we saw it, mostly David as he took charge with exchanging currency, was people using the ATM’s at banks to withdraw money. These were not US CITIZENS. Whereas as an American, we had to go to a bank or CaDeCa (Caja De Cambio – Currency Exchange) to exchange currency like US tourists would with travelers checks a couple decades ago.

6. Communist Markets
As with anywhere, we wanted to stock up on food, bottled water, and alcohol. Visiting a communist Mercado was an experience. There’s more than 1 counter in an establishment. 1 for kitchen electrics, 1 for cleaning supplies, 1 for dry goods, water and alcohol, 1 for meat, 1 for dairy. But we never saw where we could buy eggs, fruit or vegetables. On rare occasions, we saw a wooden cart trotting down a street or randomly set on a side street. And that’s normally what David and I want to be. We want to grab a piece of bread, tomato, cucumber, cheese and fruit to take home. Why is the woman standing in line behind David asking/begging for money? No shame, she put her hand right out asking for money.

Next Time
If I travel to Cuba again I’ll be better prepared. I’d stay in Old Town Havana and venture out to the rest of the city from there. I liked the look of the markets, restaurants, and squares the best in this neighborhood. I would recommend to anyone to get outside of Havana to at least one other city, if not more as time and money permits. Do a lot of research ahead of time. Not just on where to stay and how much cash you should have, but on details like how to get from Havana to other cities. Private ride or shared ride? How do you find a shared ride/bus and is it reliable and safe? Will they pick you up or do you have to meet them at a bus station? If you want to do a guided tour, who are these businesses and how do you find them?
While I normally try to have a balance between scheduling things ahead of time for structure on my trip and just being able to wing it for happy little accidents (finding those random places and experiences I wouldn’t have found on a tour or in a book), Cuba may be my exception to that rule. I’ve been to places where I can still schedule things once I get there. I can buy those tickets, go on that tour, and the like after I arrive. It’s not so easy; it can be done but there are a few more obstacles. With the cash is king scenario, it cuts into your cash budget. If you want to use a credit card, you’ll need to use internet which requires you using the slow internet cards or head to the public parks.